It is a chemically synthesized analogue of natural peptidoglycan, the cell wall of all gram-positive and gram-negative bacteria. 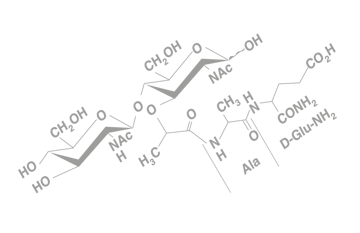 It is produced by peptide technology by two-stage chemical synthesis based on compounds of classes of dipeptides and disaccharides.

Preparative high-performance liquid chromatography and lyophilization are used for purification and separation of the final product, respectively. It is an activator of the innate immune system.

Each microbial cell "puts" on an outer protective layer called the "cell wall", a significant part of which is peptidoglycan. The latter consists of regularly repeated fragments that form a framework. Peptidoglycan, its structural components, on the one hand, protect the bacterial cell, and on the other hand "give out" its belonging to the microbial world.

The active principle of Licopid® – GMDP (glucosaminylmuramyldipeptide), is a complete synthetic analogue of the repeating fragment of peptidoglycan of Gram+ and Gram- bacteria.

In the body, GMDP is formed in vivo by the action of various hydrolytic enzymes that break down the bacterial cell wall.

The materials posted on the site are for informational purposes only and are not intended to advertise or promote the manufacturer or medications produced!
Information from this website should not be used for self-diagnosis and self-treatment and can not substitute a full-time consilataion with a doctor!
© АО «Пептек», 1996–2021